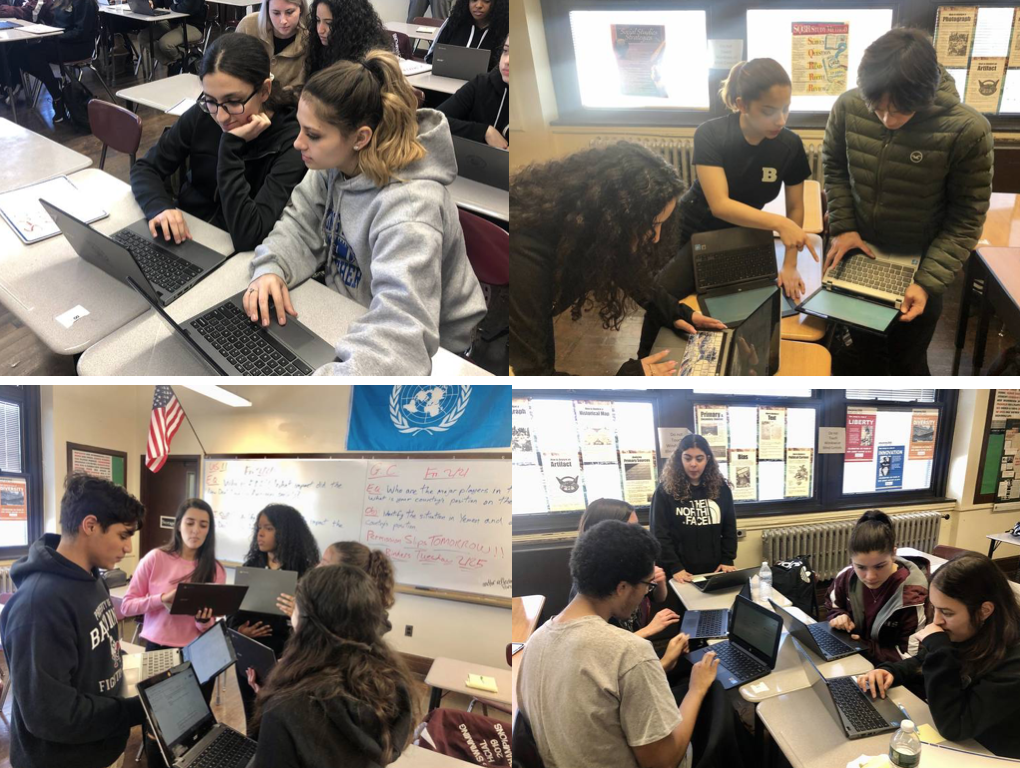 BAYONNE, NJ – Whispers and glances exchanged, notes being passed, the obvious formation of cliques, and the teacher said nothing, in fact, some might say he offered a few approving nods.

While these are not actions one typically likes to see in a high school classroom, they were all encouraged when TAPinto Bayonne sat in on James McCafferty’s Global Citizenship Class on Friday.

The topic for the day: helping to bring an end nearly 5-year Yemeni Civil War.
From the outset it was obvious the class was like no other. It wasn’t McCafferty who brought the class to order, there was no reading of attendance, no lecture.
Instead, minutes after the bell rang

Bayonne High School seniors Kristina Kuckailis and Safa Elzanfali assumed their positions at the top of the classroom, took a roll call of nations present, and asked for motion to open debate.

One by one students stepped to the front of the room and offered their opening comments.

“It is our duty to step in and recognize the situation,” Indonesia’s representative said, followed by a prescient call from Vietnam that the nations gathered “must not take the lessons of the past for granted.”

“As responsible nations we must put an end to this conflict,” offered Russia just before China urged that “we must not think about ourselves.”

Over the next 60 minutes the students would debate and negotiate, caucus and vote, all with an aim to bringing about consensus to how the members of the United Nations Security Council can use tools available to them, including political pressure, humanitarian aid, and even military intervention, to end a conflict that has created a humanitarian crisis, brought about charges of war crimes, and cost over 100,000 lives more than 7,000 miles away.

A far departure from the traditional “three Rs” of classroom learning, the skills being developed by the students through the simulated diplomatic efforts, McCafferty told TAPinto Bayonne, heightens the critical thinking skills of the students, something that is in great demand in today’s workplaces.

“Being knowledgeable is important,”

McCafferty said. “But without being able to analyze a situation and provide a solution careers prospects are dampened.”
With the PALS resolution adopted, one designed to bring the aforementioned national assets to bear in the conflict, Kuckailis and Elzanfali turned the discussion to the class’s upcoming trip to New York City where they will participate alongside students from across the globe in a similar event at the United Nations. 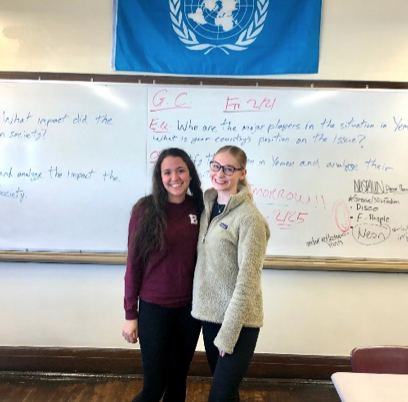 In addition to knowing the prescribed policies of the countries they’d be representing, the students were advised to enjoy meeting others, grow their interests, and savor the experience.

Their diplomatic skills aside, there was no mistaking the fact that there is also a competitive element to the gathering.

Having participated previously, Elzanfali told her teammates that now they know what level they have to match. “The other kids aren’t any different than us, there is nothing they know that we don’t” she advised.

“Be a power delegate,” she said in a way fitting of a sideline pep talk. “Be heard!”
Asked later how the lessons they were learning and skills they were developing translated more locally Elzanafi didn’t miss a beat. “We are a diverse community,” she said of Bayonne. Through their participation in the Model UN, she added, they are getting the opportunity to see different perspectives and “consider different viewpoints.”

“You grow by doing this, as a person” Kuckailis added. “You learn to listen.”

Appearing confident enough to take on the world’s greatest challenges, yet armed with their developing listening and critical thinking skills, all while showing incredible maturity, the class leaders believe even as teenagers they can make a difference.

“Even if your voice is drowned out stand by it,” Elzanafi said.

“There is always something you can do,” Kuckailis interjected, offering her experience that if one is well researched and passionate “people will listen.
Indeed participation in the Model UN is not free and the students have had to raise funds to cover the expenses, something Kuckailis said sets them apart from many of their peers from wealthy families abroad that will also attend.

Part of the fundraising came in the form of a $7,000 donation made possible by the one2one USA Foundation, a platform for charitable giving that operates by the credo that helping one person at a time will collectively improve countless lives.

Saying that they were excited to help the Bayonne students attend the conference Scott Krase, one2one’s Founder told TAPinto Bayonne that it was the teenage daughter of a family in New York that helped direct the contribution.

“This is exactly the type of direct and transparent philanthropy that is possible through one2one. We know the students will have an incredible experience at the conference.”