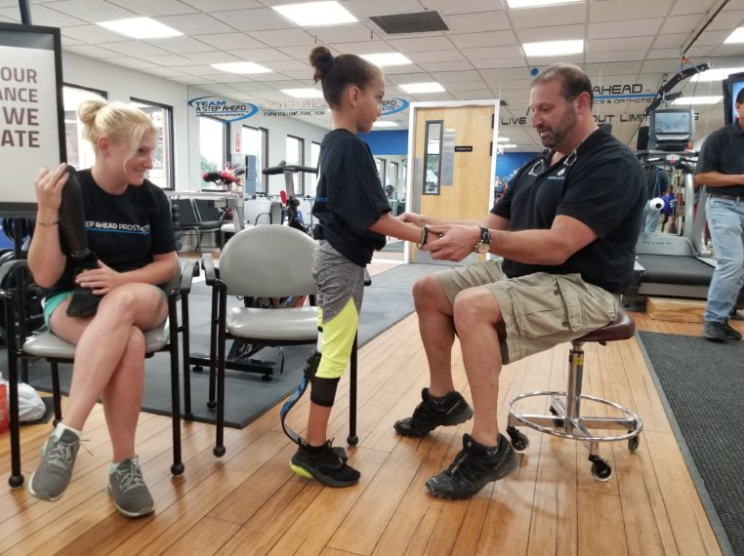 “It happened so fast, a split second, but from day one she was strong as can be. An absolute rockstar.” These words come from 9-year-old Myleanna Siedlecky’s mother, Jessica, as she told the story of why her daughter needed a below-the-knee amputation on her left leg.

It was a late April day in 2017, and Myleanna was just 7 years old as she was helping out with mowing the lawn. Riding around on a zero turn mower, the youngster fell while trying to retrieve her shoe that was slipping off. Last Friday, the pair, along with Myleanna’s grandmother, traveled four hours by car from their countryside home to A Step Ahead Prosthetics in Hicksville, where the fourth grader was fitted for a prosthetic blade.

Citing colors and patterns such as pink, ocean, mermaid and “glittery titanium,” Myleanna had previously worn seven different prosthetic legs for her below-the-knee amputation, but this marks the first blade, and eighth prosthetic, she’s worn. Better suited for athletic activities, the blade will allow Myleanna to perform better at what she loves most: running, soccer and basketball.

“We live in the country and [riding the lawn mower] was something that I always did growing up, I never once even thought about the possibility of [falling off] happening,” said Jessica, who is just as athletic and energized as her free-spirited daughter. The pair cartwheeled and ran down the hall together in the prosthetics office as Myleanna tested out her blade. Presenting the blade to Myleanna were Gardenia Cucci, executive director at one2one USA Foundation, and Erik Schaffer, owner of A Step Ahead Prosthetics since he opened the facility in 2001.

Myleanna’s new leg came to her as a donation through one2one, an organization that pairs donors looking to make a meaningful contribution with individuals in need. In this case, a one2one donor was matched with A Step Ahead to provide a grant to a youth in need. Myleanna was selected as the grant recipient and was gifted her blade. “She’s grown as a little person coming out of her shell and hitting all her little milestones, I don’t think this little girl has got any limitations in her life,” said Schaffer, who has worked with Myleanna from the start in designing and fitting prosthetics for her, training her and working with her to overcome her adversities. “[The blade] is going to take it to the next level for her. Just like [Myleanna] and others, it’s why I get up in the morning. It’s very satisfying and gratifying knowing that you’re able to change lives.”

Over the course of what Jessica has called an extremely long journey, she’s been swept through a whirlwind of emotions. “A ton of different emotions throughout the entire process, from never thinking that I was going to be happy ever again to seeing how [Myleanna] responded has been truly amazing, and she just sets her heart to something and she makes it happen,” Jessica mused. “Nothing holds her back.” Since Myleanna’s accident, the Siedlecky’s have become advocates for lawn mower safety. But above all, Myleanna has learned how to make the best out of her situation.

“Since day one, I’ve told her people are not staring to be mean, they stare because they’re curious, they don’t understand,” explained the youngster’s mother. “She makes positively of every situation. At first, it was ‘I can’t,’ but then once she realized ‘wait a second, I can,’ she’s just truly grasped that and ran with it.”

At the moment, the family is saving money to bring Myleanna to Florida so she can meet Winter and Hope, a dolphin with a prosthetic tail and a dolphin rescued as a calf, respectively, at the Clearwater Marine Aquarium.